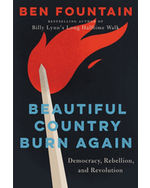 Twice before in its history, the United States has been faced with a crisis so severe it was forced to reinvent itself in order to survive: first, the struggle over slavery, culminating in the Civil War, and the second, the Great Depression, which led to President Roosevelt’s New Deal and the establishment of America as a social-democratic state. In a sequence of essays that excavate the past while laying bare the political upheaval of 2016, Ben Fountain argues that the United States may be facing a third existential crisis, one that will require a “burning” of the old order as America attempts to remake itself.