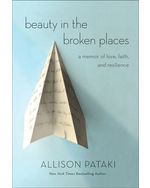 Beauty in the Broken Places: A Memoir of Love, Faith, and Resilience

A deeply moving memoir about a young couple whose lives were changed in the blink of an eye, and the love that helped them rewrite their future.

Five months pregnant, on a flight to their “babymoon,” Allison Pataki turned to her husband when he asked if his eye looked strange and watched him lose consciousness. After an emergency landing, she learned that Dave — a healthy thirty-year-old athlete and surgical resident — had suffered a rare and life-threatening stroke. As a way to make sense of their new reality, Allison wrote daily letters to Dave — to preserve their past, protect their present, and fight for their future.