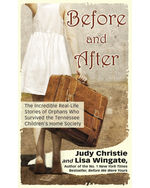 Before and After: The Incredible Real-Life Stories of Orphans Who Survived the Tennessee Children's Home Society

From the 1920s to 1950, Georgia Tann ran a black-market baby business at the Tennessee Children’s Home Society in Memphis. She offered up more than 5,000 orphans to eager parents — hiding the fact that many weren’t orphans at all, but stolen sons and daughters of poor families, single mothers, and women told in maternity wards that their babies had died. Before and After includes shocking accounts of the ways in which adoptees were separated from their first families, many having joyfully reunited with siblings in the final decades of their lives.