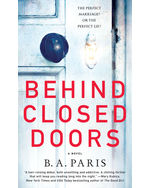 Everyone knows a couple like Jack and Grace. He has looks and wealth, she has charm and elegance. You might not want to like them, but you do. Though, some do wonder why Grace never answers the phone. Or how she can never meet for coffee, even though she doesn't work. How she can cook such elaborate meals but remain so slim. And why there are bars on one of the bedroom windows . . .

“Debut-novelist Paris adroitly toggles between the recent past and the present in building the suspense of Grace’s increasingly unbearable situation, as time becomes critical and her possible solutions narrow. This is one readers won’t be able to put down.”

“Newlyweds Grace and Jack Angel seem to lead a perfect life in British author Paris’s gripping debut, but appearances can be deceiving . . . Grace’s terror is contagious, and Millie’s impending peril creates a ticking clock that propels this claustrophobic cat-and-mouse tale toward its grisly, gratifying conclusion.”

“A frighteningly cool portrait of a serious sadist, Behind Closed Doors is a gripping, claustrophobia-inducing thriller... Read at the risk of running from every handsome British lawyer who crosses your path.”