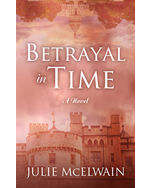 February 1816: A race through the icy, twisting cobblestone streets of London ends inside an abandoned church — and a horrific discovery. Bow Street Runner Sam Kelly is called to investigate the grisly murder of Sir Giles Holbrooke, who was left naked and garroted, with his tongue cut out. Twenty-first century FBI agent Kendra Donovan has been trying to adapt to her new life in the early nineteenth century, and she is eager to use her skills again. Kendra’s return to the gritty streets of London takes her down increasingly dangerous paths, especially when another body is discovered murdered in the same ritualistic manner.