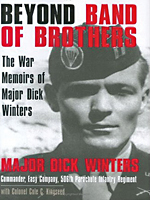 Beyond Band of Brothers: The War Memories of Major Dick Winters

They were called Easy Company - but their mission was never easy. Immortalized as the Band of Brothers, they suffered 150 percent casualties while liberating Europe; an unparalleled record of bravery under fire. Dick Winters was their commander - "the best combat leader in World War II" to his men. This is his story, told in his own words for the first time. Beyond Band of Brothers is Winters' memoir - based on his wartime diary - but it also includes his comrades' untold stories. Virtually all this material is being released for the first time. Only Winters was present from the activation of Easy Company until the war's end. Winner of the Distinguished Service Cross, only he could pen this moving tribute to the human spirit.

". . . the major and his collaborator developed an excellent narrative voice to recount Winters' experiences, actions, and thoughts during everything from training to deployment to battle to subsequent occupation. Winters has been praised as an exemplar of leadership, and here he shows what he did to earn that praise and how he did it. Very well done, book as well as war service." - Booklist