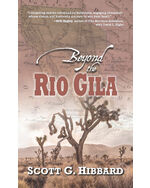 
Beyond the Rio Gila

In 1846, the Mexican–American War cast together Latter-day Saints fleeing persecution and the US Army. The Mormon Battalion must march two thousand miles. Among the army’s First Dragoons, Moses Cole, a Virginia farm boy running from his abusive father, grows to manhood under the mentorship of a tormented alcoholic and former professor. Among the Mormons, Orson Everett teaches his colorful followers to work for their brethren with God in their hearts. On such a journey, some will thrive, some will perish, all will be transformed. This deeply researched depiction of the US military’s longest march brings a little known yet uniquely American story to life.