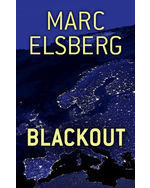 An Indie Next Pick
An International Bestseller

Across Europe, controllers watch in disbelief as electrical grids collapse. There is no power, anywhere. A former hacker and activist, Piero investigates a possible cause. But the authorities don’t believe him. Now a prime suspect, Piero goes on the run with Lauren Shannon, an American CNN reporter based in Paris, desperate to uncover who is behind the attacks.

“Elsberg delivers a thrilling read and sucks readers into a mind-boggling, all too scary world.”