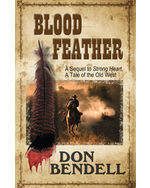 Blood Feather: A Sequel to Strongheart, A Tale of the Old West

His name is We Wiyake‚ meaning “Blood Feather.” He stalks prey in both the native and the white worlds. Killing makes him feel alive. But he does more than just kill — he eats his victims’ hearts and leaves a blood-soaked feather on their faces. The only person who can track Blood Feather is Joshua Strongheart‚ a man who was a mentor to one of the monster’s victims. But Blood Feather won’t be taken easily: he can see that Strongheart is his ultimate prey.