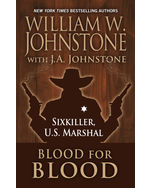 Judge Ephraim Doolittle is begging for help. A killer he sent to the gallows has a brother who has sworn vengeance on judge and jury. John Henry Sixkiller is the perfect man for this job. He’ll do it the hard way: get himself arrested, bust out of jail, and worm his way into an outlaw haven run by beautiful, amoral Lottie Dalmas, the lover of the late outlaw Henry Garrett. At the center of the plot for revenge, she has stone-cold killers at her beck and call. But someone else is also running the show: a remorseless, brutal outlaw hiding in plain sight and already moving toward his next killing — of John Henry Sixkiller.