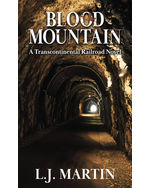 One man ruled the mountainside — and made a deal with the would-be railroad’s competitors. If Simon Striker could stop the steel tracks, he could earn a fortune. Now a brawling, quarrelling crew of immigrant railroad workers — Chinese, Irish and Polish — are about to be swept into a death trap in the mountain. And as Striker unleashes his landslide of terror, treachery and murder, a tough Irishman and sword-wielding Chinese fighter are going after him — in a battle of courage and cunning on a mountain stained with blood.