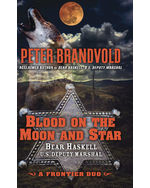 
Blood on the Moon and Star: A Frontier Duo

Two western novels featuring Bear Haskell, U.S. Deputy Marshal. Haskell’s a former Union war hero and Pinkerton agent, a big man over six and a half feet tall and as broad as a barn door. He wears a necklace of bear claws taken from the grizzly that almost had him for supper. In the first of these westerns, Bear is given the nasty assignment of tracking down an escaped convict before the convict can kill his own lawman father. In the second book, Bear heads to the frigid climes of Dakota Territory to solve a series of unexplained murders in the little town of Sioux Camp.