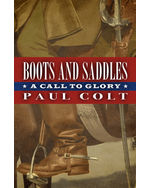 Boots and Saddles: A Call to Glory

At thirty-two‚ Second Lieutenant George Patton is mired in a dead-end career. Then the U. S. Cavalry is called to one last fight. In the spring of 1916‚ political instability in Mexico crosses the border when Pancho Villa raids Columbus‚ New Mexico. President Wilson orders a Punitive Expedition to bring the outlaw revolutionary to justice. As General Pershing mounts an aggressive campaign‚ Patton confronts the reality of 20th-century warfare.

"Colt's sweeping and historically vivid portrayal of the punitive expedition, American and Mexican relations, and German double dealing . . . makes this novel an exciting and stunning success."