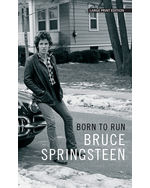 In 2009, Bruce Springsteen and the E Street Band performed at the Super Bowl’s halftime show. The experience was so exhilarating that Bruce decided to write about it. That’s how this extraordinary autobiography began. Over the past seven years, he has privately devoted himself to writing the story of his life, bringing to these pages the same honesty, humor, and originality found in his songs. Rarely has a performer told his own story with such force and sweep. Like many of his songs, Bruce Springsteen’s autobiography is written with the lyricism of a singular songwriter and the wisdom of a man who has thought deeply about his experiences.