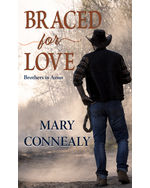 A CBA Bestselling Author
Brothers in Arms (Book One)

Left with little back in Missouri, Kevin Hunt takes his younger siblings on a journey to Wyoming when he receives news that he’s inheriting part of a ranch. The catch is that the ranch is also being given to a half-brother he never knew existed. Danger seems to track Kevin along the way, and he wonders if his half-brother, Wyatt, is behind the attacks. Finally arriving at the ranch, everyone is at each other’s throats and the only one willing to stand in between is Winona Hawkins, a nearby schoolmarm. Winona can’t help but be drawn to the earnest, kind Kevin — and that puts her in the cross hairs of somebody’s dangerous plot.