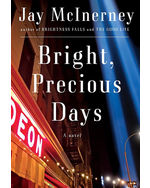 Even decades after their arrival, Corrine and Russell Calloway still feel as if they’re living the dream that drew them to New York City, until Corrine’s world is turned upside down when the man with whom she’d had an ill-fated affair in the wake of 9/11 suddenly reappears. As the novel unfolds across a period of stupendous change — including Obama’s historic election and the global economic collapse he inherited — the Calloways will find themselves and their marriage tested more severely than they ever could have imagined.

“In this powerful portrait of a marriage and a city in the shadow of the looming subprime mortgage crisis, McInerney observes the passage of life’s seasons with aching and indelible clarity.”