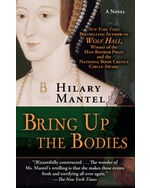 Bring Up the Bodies

Though he battled for seven years to marry her‚ Henry is disenchanted with Anne Boleyn. She has failed to give him a son and her sharp intelligence and audacious will alienate his old friends and the noble families of England. At a word from Henry‚ Thomas Cromwell is ready to bring her down. Over three terrifying weeks‚ Anne is ensnared in a web of conspiracy while the demure Jane Seymour stands waiting her turn for the poisoned wedding ring.