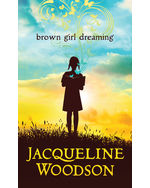 In vivid poems, Jacqueline Woodson shares what it was like to grow up as an African-American in the 1960s and 1970s, living with the remnants of Jim Crow and her growing awareness of the Civil Rights movement. Touching and powerful, her poems are accessible and emotionally charged glimpses into a child’s soul as she searches for her place in the world.

“Mesmerizing . . . With exquisite metaphorical verse Woodson weaves a patchwork of her life experience . . . that covers readers with a warmth and sensitivity no child should miss. This should be on every library shelf.”