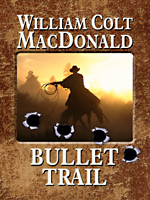 When Joe Frame gunned down Clem Hayden‚ something about it seemed funny to Tucson Smith. His suspicions were confirmed when a fight erupted over the dead man’s .45. Tucson returned the gun to the dead man’s daughter‚ who promptly denied that he’d ever owned it. Pondering the initials carved on the gun butt‚ and the fact that Hayden’s cattle were being rustled — Tucson knew he’d be staring down six-gun muzzles before he got some answers!