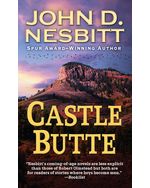 Seventeen-year-old Alden Clare has plenty weighing on him: an ailing father, a restless older brother, and an impatient girlfriend. His brother argues with their father and leaves. His girlfriend, Claudette, decides she doesn't want to wait any longer, so she goes to live with Alden's friend, Cash. Alden meets a pretty nester girl named Bonnie Wilcox, who has an irascible father. Before long, Alden learns that Cash has joined a band of ruffians who harass Jack Wilcox. Then Cash turns up dead. Alden's brother, Grant, comes back to town, takes up with Claudette, and goes to work with the same band of ruffians. As Alden tries to find out the motive for the harassment, the ruffians kill Jack Wilcox, and their leader becomes obsessed with Claudette. Alden then has to defend himself against the henchmen and to have a showdown with their boss.