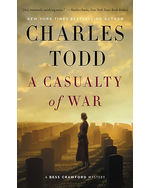 Though the Great War is nearing its end, the fighting rages on. While waiting for transport back to her post, Bess Crawford meets Captain Alan Travis from the island of Barbados. Later, when he’s brought into her forward aid station disoriented from a head wound, Bess is alarmed that he believes his distant English cousin, Lieutenant James Travis, shot him. Then the Captain is brought back to the aid station with a more severe wound, once more angrily denouncing the Lieutenant as a killer. But when it appears that James Travis couldn’t have shot him, the Captain’s sanity is questioned. Still, Bess wonders how such an experienced officer could be so wrong.