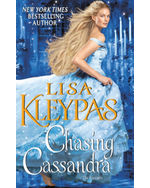 Everything has a price . . .
Railway magnate Tom Severin is wealthy and powerful enough to satisfy any desire as soon as it arises. Anything — or anyone — is his for the asking. It should be simple to find the perfect wife — and from his first glimpse of Lady Cassandra Ravenel, he’s determined to have her. But the beautiful and quick-witted Cassandra is equally determined to marry for love — the one thing he can’t give.

Everything except her . . .
Severin is the most compelling and attractive man Cassandra has ever met, even if his heart is frozen. But she has no interest in living in the fast-paced world of a ruthless man who always plays to win.

When a newfound enemy nearly destroys Cassandra’s reputation, Severin seizes the opportunity he’s been waiting for. As always, he gets what he wants — or does he? There’s one lesson Tom Severin has yet to learn from his new bride: Never underestimate a Ravenel.

The chase for Cassandra’s hand may be over. But the chase for her heart has only just begun . . .