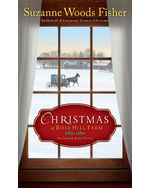 Bess Riehl is preparing Rose Hill Farm for her Christmas wedding‚ but not with the groom she expected. Billy Lapp is far from his Amish roots working as a rose rustler for Penn State‚ and wants nothing to do with Stoney Ridge. And why should Bess think twice about a man who left without a word? It’s time she moved on‚ and that meant saying yes to Amos Lapp‚ Billy’s cousin and best friend. Then a “lost” rose is discovered at Rose Hill Farm.