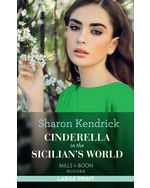 
Cinderella In The Sicilian's World

Transformed by his tantalizing touch . . .
A single look from Salvatore Di Luca. That’s all it took for virgin Lina’s life to change — forever. For one night, she escaped from her ordinary, suffocating life . . . and found freedom in the Sicilian’s arms!

It defies every rule Salvatore has set himself, but he just can’t resist enchanting Lina. Still, he refuses to let her into his fiercely guarded world. Until he finds their impulsive encounter cost Lina everything . . . He may never trust her, but if Lina is staying in his luxurious mansion, it will be in his bed!