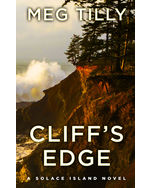 Eve Harris is all set to house-sit and run the bakery she shares with her sister while Maggie goes on her honeymoon, but there’s one problem — the house is already occupied. By a movie star. Claiming to be her brother-in-law’s friend, he not only insists on staying, but offers to help. Playing house has never been so tempting. . . . Rhys Thomas was looking for a place to lie low after wrapping up his latest film, so when Luke offered his house Rhys saw a perfect opportunity for a little R & R. Soon rest is the last thing on his mind, as he and Eve grow close. But Rhys and Eve are not as alone as they think . . .