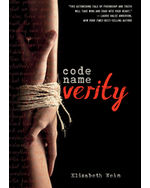 October 11‚ 1943: A British spy plane crashes in Nazi-occupied France. Its pilot and passenger are best friends. One of the girls has a chance at survival. The other has lost the game before it’s barely begun. As a secret agent captured in enemy territory‚ “Verity” is living a spy’s worst nightmare. Her Nazi interrogators give her a choice: reveal her mission or face a grisly execution. As she intricately weaves her confession‚ Verity uncovers her past.