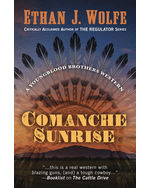 Two Hawks, a once proud Comanche warrior, is now living a life of desperation on the reservation at Fort Smith, Arkansas. Filled with hate and anger for the white man, he longs for the days when he was free to roam and live in his native land. When his wife dies, Two Hawks leaves the reservation and heads for Texas. Reservation Chief of Police Emmet Youngblood is assigned the task of bringing Two Hawks in for trial. But Emmet’s older brother, United States Marshal Jack Youngblood, is to accompany him. There is bad blood between the brothers, but they must make peace if they are to catch Two Hawks and bring him to justice.