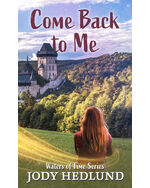 
Come Back to Me

The ultimate cure that could heal any disease? Crazy. That’s exactly what research scientist Marian Creighton has always believed about her father’s quest. But when her father falls into a coma after drinking a vial of holy water, he’s left behind tantalizing clues that suggest he’s crossed back in time. Insane. Until Marian tests his theories and finds herself in the Middle Ages during a dangerous peasant uprising. William Durham, a valiant knight, comes to Marian’s rescue and offers her protection. The longer Marian stays in the past, the more she cares about William. When the time comes to leave, will she want to?