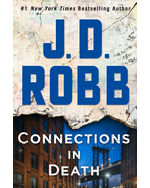 Homicide cop Eve Dallas and her billionaire husband, Roarke, are building a school and youth shelter. They hire child psychologist Dr. Rochelle Pickering, who helped her own brother, Lyle, with his battle against addiction and crime. But after Lyle is found dead with a syringe in his lap, Eve's investigation reveals that Lyle was injected with poison. Now Eve and Roarke must venture into New York City's gang territory and make sure that justice is served. They both believe in giving second chances, but as far as they're concerned, whoever ordered Lyle's murder will be doing heavy time.