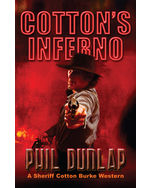 No one could match Carp Varner’s skill with a sidearm or his murderous temper. When his bid for mayor of Whiskey Crossing‚ Texas‚ yields only one vote in his favor — his own — Varner razes the town to the ground in a blaze of flames and hot lead. Then he shows up in Apache Springs to offer his services as a gunsmith and gets on the good side of Sheriff Cotton Burke. Until Burke learns of Varner’s past crimes and unleashes an inferno of his own.