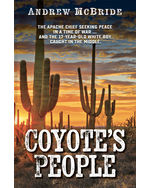 Arizona Territory, the 1870s. Savage war rages between the white man and the Apache. Three people are caught in the middle: Coyote, an Apache chief seeking peace, trying to find a refuge for his small band of wanderers; Lieutenant Austin Hamilton, commander of remote Camp Walsh, a man sympathetic to the Indians’ plight; and Calvin Taylor (nicknamed Choctaw), a 17-year-old white boy. Choctaw has been taught to hate Apaches but his loyalties are torn when he falls in love with an Apache girl. Each man is at the center of this bitter conflict, enmeshed in treachery and violence, with their own lives, and the peace they’re striving for, threatened by enemies on all sides.