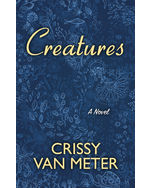 On the eve of Evangeline’s wedding, on the shore of Winter Island, a dead whale is trapped in the harbor, the groom may be lost at sea, and Evie’s mostly absent mother has shown up out of the blue. From there, Evie reckons with her complicated upbringing in this lush, wild land off the coast of Southern California. Evie grew up with her well-meaning but negligent father, and although her father raised her with a deep respect for the elements, the sea, and the creatures living within it, he also left her to parent herself. Creatures probes the ways in which our childhoods can threaten our ability to love if we are not brave enough to conquer the past.

“Some of the most heartbreaking moments in this novel are the most simply told, and there are scenes of beauty and magic and dry humor amid the chaos . . . A quietly captivating debut.”

“Van Meter’s wonderfully un-ordinary debut is rather like the ocean itself: layered, deep, and happening all at once . . . This is a moving, graceful novel of how people change and are changed by natures within and without.”

“Tender and atmospheric . . . Van Meter expertly and effortlessly brings to life at once her father’s substance abuse and dependence, his doting love for his daughter and loyalty to her absent mother, and his inability to be what Evie needs. His deep mark on Evie’s life, and her feelings toward him, are the book’s beating heart . . . this promising debut sneaks up on the reader, packing a devastating emotional punch.”