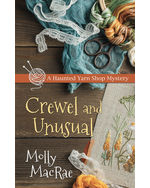 Yarn shop owner Kath Rutledge is looking forward to the grand opening of the Blue Plum Vault, a co-op of small shops on Main Street. But in the week before the grand opening, Kath and her needlework group, TGIF, hear rumors of an unpleasant rivalry developing between two of the shopkeepers, Nervie Bales and Belinda Moyer. When Belinda is found stabbed to death, the only witness is Geneva, the ghost who haunts Kath’s store. But the ghost is the ultimate unreliable witness — only Kath and her shop manager can see or hear her. That means it’s up to Kath, TGIF, and Geneva to solve the crime before the killer cuts another life short.