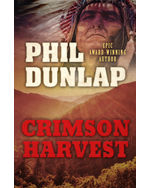 In the Indiana Territory at the beginning of the War of 1812, a powerful Shawnee war chief clings desperately to the tribal lands. Seeing the American settlers as invaders, he sides with the British and musters his warriors to battle. In one surprise afternoon attack on a small settlement, men, women and children were murdered and scalped for the five-dollar bounty offered by the British. For young frontiersman Bran Campbell, saving settlers’ lives is of paramount importance.