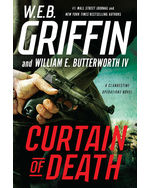 January 1946: As two WACs leave an officers’ club in Munich, four Soviet agents kidnap them and shove them into an ambulance. That is the agents’ first mistake, and their last. One of the WACs, improbably named Claudette Colbert, works for the new Directorate of Central Intelligence — and three of the men end up dead and the fourth wounded.

Showcases the scary time period just after WWII and the beginnings of the CIA and the Cold War . . . Compelling.