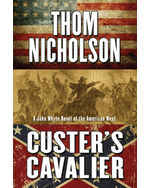 A John Whyte Novel of the American West

John Whyte has quit the British Army and come to join the Union cause in America. Commanding the 5th Michigan Cavalry under General Custer, Whyte follows him into battle until he’s captured at the Battle of Cedar Creek. Sentenced to death in the infamous Libby Prison, Whyte will need all his courage and cunning to survive.