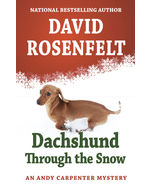 Dachshund Through the Snow

Lawyer Andy Carpenter and his wife, Laurie, have started a new Christmas tradition. Their local pet store has a Christmas tree, where instead of ornaments, there are wishes from those in need. One poignant wish leads Andy to a child named Danny, who asked Santa for a coat for his mother, a sweater for his dachshund, and for the safe return of his missing father. It turns out Danny’s father is on the run after just being arrested for a murder that took place fourteen years ago — a murder that Danny’s mother swears he didn’t commit. Andy and his eccentric crew must now dash to reunite a family in time for Christmas.