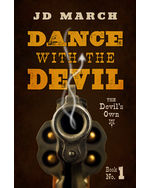 Dance with the Devil

Johnny Fierro’s a gunfighter, maybe the best, so tired of the killing that he’d welcome death. Then he hears that his estranged father faces a battle for his land in the Cimarron Valley. Fierro swore to kill his father, and this is his chance. But he hadn’t reckoned on a share of his father’s ranch, or a Harvard-educated brother he never knew existed. As they struggle with his violent past, Fierro must decide what to believe — before the bullets start flying.

"First-time author J.D. March's Dance with the Devil is a dynamite beginning to a new series . . . Johnny Fierro is a conflicted gunfighter that fans of Elmore Leonard's outlaw heroes will recognize and cheer for — even when they know he's wrong." 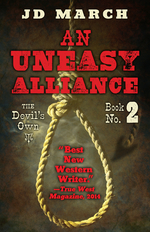