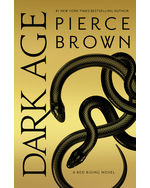 A decade after leading a revolution, Darrow is an outlaw, waging a rogue war on Mercury. Now, there’s a new hero: Lysander au Lune, heir to the old empire, aims to unite the Golds, in a move that may destroy the fledgling Republic. On Luna, Sovereign Virginia au Augustus fights for both demokracy and her exiled husband. Her son, Pax au Augustus, has been abducted by enemy agents and must trust a thief for his salvation. Across the void, Lyria, a Red refugee, is helped in her bid for freedom by two unlikely allies. Everywhere, hopes of the Rising are threatened by power struggles, and the worlds spin toward a new Dark Age.