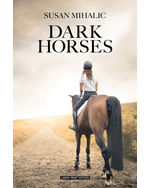 Fifteen-year-old equestrian prodigy Roan Montgomery has only ever known two worlds: inside the riding arena, and outside of it. Both, for as long as she can remember, have been ruled by her father, who demands strict obedience in all areas of her life. The warped power dynamic of coach and rider extends far beyond the stables, and Roan’s relationship with her father has long been inappropriate. She’s been able to compartmentalize that dark aspect of her life, ruthlessly focusing on her ambitions as a rider heading for the Olympics, just as her father had done. However, her developing relationship with Will Howard, a boy her own age, broadens the scope of her vision.

“The novel takes every narrative hurdle as nimbly and astonishingly capably as Roan does the courses she rides. This is a powerhouse.”

“Mihalic is an expert in creating narrative drive; the urge to keep reading is powerful. . . . A provoking and needed book.”

“A searing examination of love and lust, power and control, as the narrator’s rising sense of self yearns to take the reins.”

“Mihalic astutely builds her absorbing debut novel . . . a narrative that reaches shattering heights. Deftly sketching the relationships here (including the relationship between horse and rider), Mihalic gives a powerful and insightful account of Roan’s abuse and her path to freedom.”