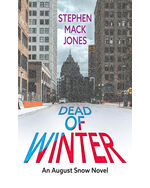 Authentico Foods Inc. has been a part of Detroit’s Mexicantown for over thirty years. Its owner, Ronaldo Ochoa, is dying, and is being blackmailed into selling the company to an anonymous entity. Worried about his employees, Ochoa wants Detroit ex-cop and Mexicantown native August Snow to buy it. August has no interest in running a tortilla empire, but he does want to know who’s threatening his neighborhood. Quickly, his investigation takes a devastating turn and he finds himself ensnared in a dangerous net of ruthless billionaire developers. August must fight not only for his life, but for the soul of Mexicantown itself.