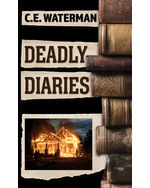 Interior Designer, Maggie Schreiber, finds her Aunt Esther murdered in the quiet neighborhood of Pinon Heights. In order to deal with her loss, Maggie begins to read Aunt Esther’s diaries, but before she gets far, most of the books are stolen. Then, her sister is attacked, and her house is set on fire. At the funeral, Esther’s life was celebrated for her generosity and caring, but what was really going on with Aunt Esther? Can Maggie stay alive long enough to protect her sister and discover what secrets the diaries hold?