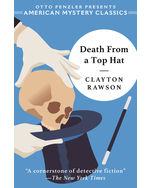 Death from a Top Hat

Retired from the tour circuit on which he made his name, master magician The Great Merlini runs a magic shop in New York’s Times Square and moonlights as a consultant for the NYPD. The cops call him when faced with crimes so impossible that they can only be comprehended by a magician’s mind. In the latest case, two occultists are discovered dead in locked rooms, one spread out on a pentagram, both seemingly murdered under similar circumstances. Suspects include an escape artist, a professional medium, and a ventriloquist — clearly a realm that Merlini knows well. But in the end it will take his logical skills, not his magical ones, to apprehend the killer.