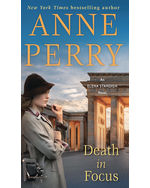 On vacation in Italy, British sisters Elena and Margot Standish are moving on from personal losses of the Great War. While photographing the Italian landscape, Elena meets a striking man named Ian. She spontaneously shares a train trip home with him, but shocking events lead Elena to Berlin. Elena’s grandfather, who, unbeknownst to his family, was once head of MI6, knows Adolf Hitler and the Third Reich are on the rise and realizes Elena may be in a dangerous predicament. Her grandfather’s MI6 contacts may be the only people who can get her out alive — if Elena can tell the difference between her allies and her enemies.