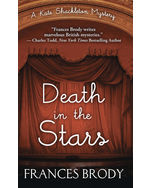 Death in the Stars

During the eclipse, Selina's friend and co-star Billy Moffatt disappears and is later found dead in the chapel grounds. Kate can't help but dig deeper and soon learns that two other members of the theatre troupe died in similarly mysterious circumstances in the past year. With the help of Jim Sykes and Mrs. Sugden, Kate sets about investigating the deaths — and whether there is a murderer in the company.

When Selina's elusive husband Jarrod — who was injured in the war and is subject to violent mood swings — comes back on the scene, Kate begins to imagine something far deadlier at play, and wonders just who will be next to pay the ultimate price for fame.