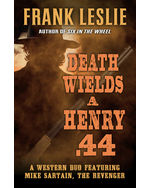 Saddle up and ride the wild trails of the old frontier with the Revenger, Mike Sartain, as he rights wrongs for people who can’t right the wrongs themselves. In Savage Barranca, the revenger is captured by the U.S. Cavalry, who has a special bone to pick with him. The governor of New Mexico Territory gives him an ultimatum: kill a man in Mexico and retrieve the governor’s kidnapped daughter or face a court-martial. In San Juan Bushwhackers, Sartain rides into the little mountain ghost town of Hard Winter looking for water. What he finds instead is a bushwhacker’s bullet. 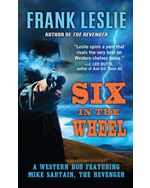 Six in the Wheel: A Western Duo