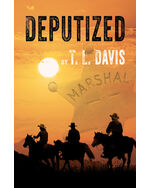 Frank Whittaker is just an unemployed trail hand trying to recover from a night of celebration when he witnesses a bank robbery and is deputized into a posse to track the outlaws. Frank is reluctant and resentful until he finds a way to make money at it by signing on as a guide for a U.S. marshal in pursuit of the same bank robbers, Dandy Jim Beudreaux and his gang. Marshal Dayton Howard and his manhunters leave a bloody trail in their pursuit of Dandy Jim through Northern New Mexico and Southern Colorado, a trail that forces Frank to confront his own morality. But capturing Dandy Jim is only part of the puzzle Frank will have to solve before justice can be done.