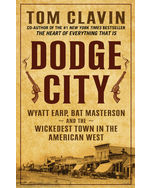 Dodge City, Kansas, was a small military site that exploded with the country’s westward expansion and became a hotbed of lawlessness. Enter Wyatt Earp and Bat Masterson. Young and largely self-trained, they led the effort that established frontier justice and the rule of law in the West. This is their true story, until now largely untold.

“No other city evokes the near mythical nature of the Old West more than Dodge City, in southwestern Kansas. One cannot think about such characters as Billy the Kid, Wild Bill Hickok and Wyatt Earp without immediately picturing the quick-draw shootouts, the saloons and brothels, and the short-tempered gamblers. The power of Clavin’s meticulously researched, utterly compelling history of this iconic American town is that while he debunks many of the myths, the facts are even more incredible than the many fictions that have populated the small and silver screen for decades. A must read for American History buffs and fans of Deadwood and Larry McMurtry.” — Bill's Bookshelf Selector, Bill Kelly