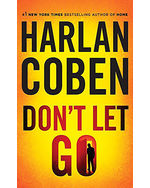 Suburban New Jersey Detective Napoleon “Nap” Dumas hasn't been the same since senior year of high school, when his twin brother Leo and Leo’s girlfriend Diana were found dead on the railroad tracks—and Maura, the girl Nap considered the love of his life, broke up with him and disappeared without explanation. For fifteen years, Nap has been searching, both for Maura and for the real reason behind his brother's death. And now, it looks as though he may finally find what he's been looking for.