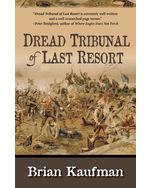 Decker Brown is a proud young Virginian, educated in Boston, with plans to manufacture illuminations — fireworks — and raise a family. He loves Paula Crane, but when the country is divided by Civil War, their loyalty to each other is put to the ultimate test. Decker believes in the Republic’s promise of liberty, while Paula can’t fathom taking up arms against her friends and neighbors. Decker struggles to protect his dreams from a catastrophic war that will cost more than half a million lives. Now, as postwar Richmond rebuilds, Decker Brown faces his most important challenge — building a new life from the rubble of war.